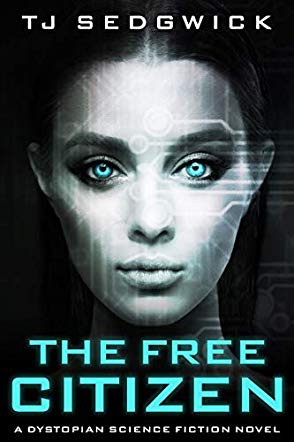 A high-octane scifi run-and-gun filled with alien parasites, cloaked ships, and all means of smoking guns. Set in the 2082, Captain Calvin Rae is the best soldier in the totalitarian American Union, a nationalist regime that has taken over the bulk of the US and Mexico. Released from his emotions by the chip embedded into his brain, he is sent on a mission to the Democratic Alliance’s Space Station Erasmus. Cal must fight through a crew of Screamers infected by the parasite to take home the most advanced AI in the world. But in the midst of the infiltration, he is shot by an enemy scientist and his chip goes haywire. He wakes up with memories and feelings he has not had in years… and a realization that President White has been controlling his life and the lives of his fellow citizens by all means possible. Rae must now do all he can to save his wife and the rest of nation from these dangerous powers.

A very quick read at just under 300 pages, The Free Citizen is a solid piece of dystopian writing. Sedgwick establishes a conspiracy that so few have the power to disrupt, and humanizes the issues with this now clearheaded character. Memories flood Cal’s brain, reaching back to his childhood in New Zealand, his training in college, and his courtship of his dear wife.

I liked the pacing, which is attune to the military thrillers I read at times. And the back and forth in Cal’s head is a good way for the reader to see the strategy in real time.

There were a few things that hampered the narrative at times. Parts of the exposition fell into the “tell” of show vs tell. Several passages at the beginning where heavy with info dumps which I thought could have been placed throughout the writing. And yes, it was predictable as many of these types of books are, but that’s ok. It’s a good escape that can be depended on to be fast and fun.

Read this one for all the explosions, drone warfare, and good-guy banter.

Thank you to the author for an advanced copy for review.