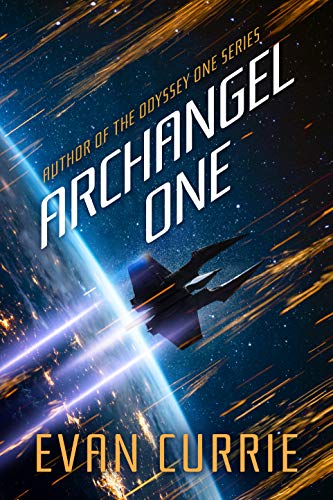 A military scifi novel about a squadron of new high-powered spaceships and a plan to infiltrate the all-consuming Empire that rules over the galaxy. The Archangel ships are designed by Earth and its allies to fly faster and with more ease in controls than any fighter ever. Yet, the brunt force and shear number of the Empire’s force causes the Earth’s forces to get creative. Their idea: to go undercover as ‘privateers’ in order to find intelligence about the enemy.

Recruitment, training, and political details take up the first half of the book. And then the mission starts to take shape. I didn’t know that this books takes place in a world the author has written about in several series. He does give sufficient background to get the reader caught up to speed. It wasn’t that that hampered my enjoyment of the book…

I had two main problems with the book: questionable character choice and a heavy dose of the physics of flight. One of the Empire’s noblemen is introduced in the first several chapters of the book and at first I thought this was going to be one of those books where were get a point of view from both sides of the conflict. But the character disappears, not to be heard from for most of the novel. There’s also several entities that live of a couple of the ships that have the ability to read thoughts. I wasn’t really sure about their role in the book. As observers of human behavior?

The second criticism is more of a ‘it’s not you, it’s me’ issue. I can only handle so much of the ‘vector’ talk when in space, and this one was very heavy in all of it.

What I did like about this book is the problem solving of the crews. Their ingenuity and outside-the-box thinking kept them one step ahead of the Empire’s forces for much of the novel.

Ultimately, this one felt like “wrong book, wrong time” for me.

Thank you to NetGalley, 47North, and the author for an advanced copy for review.

5 thoughts on “Archangel One by Evan Currie”