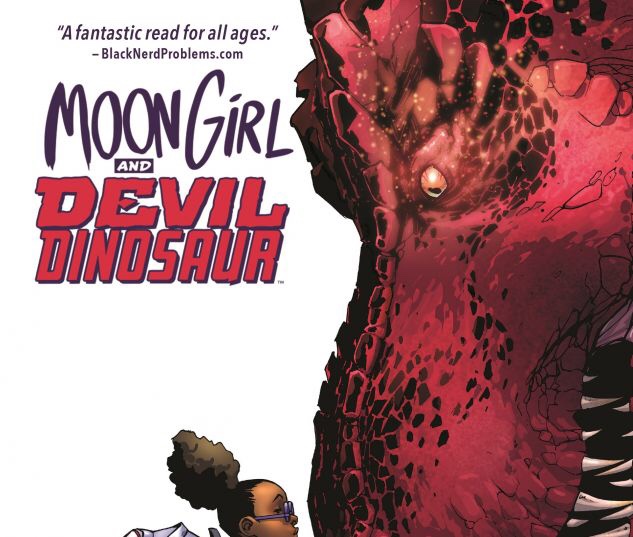 Lunella Lafayette is a 9-year-old genius. She schools her teachers on a daily basis and takes heat for it from the other kids in her class. This bullying causes her to dive further into her fascination with science… and her Inhuman gene. She lives in constant fear that something will set off that gene and she isn’t sure what would be the consequences. In the midst of this semi-crappy existence, she invents a machine that detects an object that may have answers to all her questions. But that inter-dimensional tool is stolen,  a portal is opened, and out pops Devil Dinosaur, but also a band of neanderthal hunters. This is when the action gets serious.

Moon Girl has to juggle her angry parents, a hungry dinosaur, and a band of crude cavemen. Set in the Marvel universe, there are references to many other heroes and actions that I was a little in the dark about. (My only real connection to Marvel is watching a couple of the new flicks.) The Hulk does make a cameo and has to go toe to toe with Lunella, which is very funny!

I don’t know if it is because of the lack of background knowledge on my part or some plot  holes, but there were several times in the book where I felt like I was missing some key information. I totally enjoyed it though. This is a super character and I loved the artwork that seems to be the opposite of the gritty noir stuff I’ve been reading lately. It’s bright and mostly fun, with a couple serious scenes here and there.

If you haven’t gotten into this part of the Marvel universe, I would recommend picking up Moon Girl.