Here’s a couple books that I regret not getting to last year… I’m going to keep this list short because I just can’t live with too much guilt!

The Library Book by Susan Orlean:

On the morning of April 29, 1986, a fire alarm sounded in the Los Angeles Public Library. As the moments passed, the patrons and staff who had been cleared out of the building realized this was not the usual fire alarm. As one fireman recounted, “Once that first stack got going, it was ‘Goodbye, Charlie.’” The fire was disastrous: it reached 2000 degrees and burned for more than seven hours. By the time it was extinguished, it had consumed four hundred thousand books and damaged seven hundred thousand more. Investigators descended on the scene, but more than thirty years later, the mystery remains: Did someone purposefully set fire to the library—and if so, who?

Weaving her lifelong love of books and reading into an investigation of the fire, award-winning New Yorker reporter and New York Times bestselling author Susan Orlean delivers a mesmerizing and uniquely compelling book that manages to tell the broader story of libraries and librarians in a way that has never been done before.

My Excuse: I had seen this before it was released and then I read the amazing reviews… I love these types of nonfiction books, especially since this is bookish book. My kids and I even go to the library every Saturday morning. Yes, we are those people at the door waiting for the nice librarian to flip the switch for the automatic door. I really have no excuse not to read it! 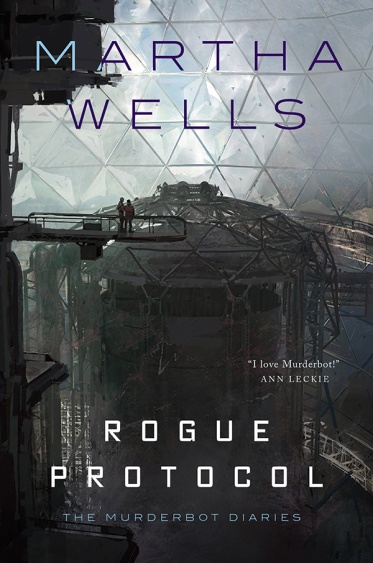 In a corporate-dominated spacefaring future, planetary missions must be approved and supplied by the Company. Exploratory teams are accompanied by Company-supplied security androids, for their own safety.

But in a society where contracts are awarded to the lowest bidder, safety isn’t a primary concern.

On a distant planet, a team of scientists are conducting surface tests, shadowed by their Company-supplied ‘droid – a self-aware SecUnit that has hacked its own governor module, and refers to itself (though never out loud) as “Murderbot.” Scornful of humans, all it really wants is to be left alone long enough to figure out who it is.

But when a neighboring mission goes dark, it’s up to the scientists and their Murderbot to get to the truth.

My Excuse: Ok, I read the first one… But I don’t want this to become a victim of my Fear Of Missing Out on the Shiny New Book (FOMOOTSNB). I’ve done a lot of that in my reading life. The perpetual “read the first book of a series,” then see a hyped-up other series, and forget to read the second book in the first series.  I need to stop that!

The Poppy War by R.F. Kuang:

A brilliantly imaginative talent makes her exciting debut with this epic historical military fantasy, inspired by the bloody history of China’s twentieth century and filled with treachery and magic, in the tradition of Ken Liu’s Grace of Kings and N.K. Jemisin’s Inheritance Trilogy.

When Rin aced the Keju—the Empire-wide test to find the most talented youth to learn at the Academies—it was a shock to everyone: to the test officials, who couldn’t believe a war orphan from Rooster Province could pass without cheating; to Rin’s guardians, who believed they’d finally be able to marry her off and further their criminal enterprise; and to Rin herself, who realized she was finally free of the servitude and despair that had made up her daily existence. That she got into Sinegard—the most elite military school in Nikan—was even more surprising.

My Excuse: I’m borrowing my friend’s excuse… “I’m waiting for the whole series to be released until I read these!”  Nah, that won’t work! I even have this one on my Kindle. I have some time in Feb and I’m going to try to fit it in.

What are your biggest Reading Regrets from 2018?  Have you read any of these books? What did you think?