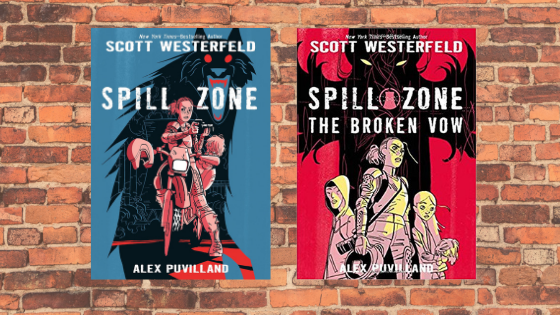 Addison’s responsibility is to take care of her sister, the girl who has been so affected by The Spill. Was it a nuclear event? A nanobot attack? No one knows, but the government has quarantined the entire town of Poughkeepsie, NY. The spill took the girls’ parents away from them and Addison wants to make sure it doesn’t take away Lexa.

Yet, people will pay big money for pictures of the new beings that have popped up in the new Poughkeepsie. Addison rides her motorcycle into the remnants and takes those pictures. She braves mutants and the undead to put food on the table. And then she gets an offer she can’t refuse, a big payout in exchange for going farther into the decimated town than she ever has before…

Westerfield writes an intriguing character whose raw strength buoys a caring touch for an injured little girl. Well-drawn scares and tough action make this a must-read for fans of the dystopian genre. Lots of fun, and you just might feel something along the way.

The first book introduced just a glimmer of the supernatural power of the Spill Zone… And the second book throws all the weird at the reader, all the far out, ghostly, and grotesque the Zone has to offer.

Hinted at in Spill Zone, there is a site in North Korea just like the in by Addison’s town. A place that has been attacked by the mutated monsters. One young man survived the event, and he is left with powers of perception into the spectral forces of the spectral visitors. These abilities make him both an asset and a liability to the North Korean government. Don Jae is brought east to see if he can figure out a way to harness the magic for his superiors. But he steals away and finds Addison and her sister, and a way to eventually help them from a nefarious being who means to hunt down his “betrothed.”

Motorbike-riding, supernatural-fighting, sister-caring Addison is a character I will not soon forget. Spill Zone is a book for the fan of the weird and terrible. Bright spills of color, and dark shadows of danger. This duology is awesome!