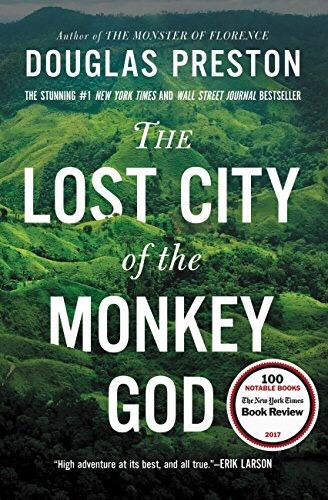 As a teenager, my sister and I were dragged to Chicken Pizza (that’s what the tour guide called Chichen Itza and he thought he was hilarious) by my mother. I thought it was a wasted day away from the pool and sun of our resort in Cancun, but it turned out to be a fascinating experience. We climbed the pyramid, examined the ball court, and walked through the temples of the site. I later minored in anthropology in part because of my mother’s love of history and discovery.

Archaeology, infectious disease, and politics combine for a very quick read in Preston’s Lost City of the Monkey God. The scientific exploration and ‘discovery’ of an untouched site in Honduras was told in a very personal voice, especially after he and the team found out what sand fleas can do to a person.

There’s a good dose of self-awareness in his writing as he tries to tackle many issues in modern archeology. Protection vs exploitation, “ownership” of the artifacts, etc. It had me thinking long after I finished the book. Highly recommended to anyone who wants to experience a modern Indiana Jones-type adventure.