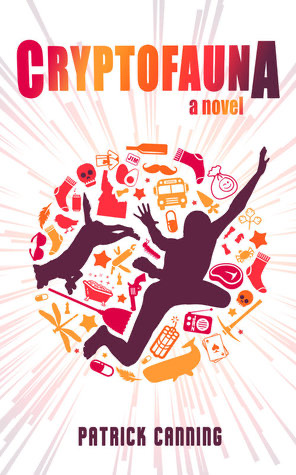 In a book I can best describe as an urban fantasy-humor-reality game show, a man named Jim is taken away from his root beer-to-induce-suicide night… to play a game of few rules but many risks. Tested and trained, he’s mostly informed by other fringe players of the game, because his mentor Oz is not really into details. I can tell you that there are Operators who start with a special item called an asset and a furry friend (but sometimes not furry) called a Companion. These Operators are trained with their Combo (allied buddy helpers) to fight Rivals…. Aaaaaaaaannnnnnnddddd that’s about all I can tell you. Except that there’s a bunch of shape-shifting jinns flitting around trying to f with everyone in the game.

As I said… rules are sketchy and a goal is none too clear, but what Canning has written is series of mindbending takes on the wheel-spinning, cheese-chasing avg Joe. He’s populated this novel with a series of characters that are both weird and interesting. Jim’s mentor Oz breaks into the mental asylum where Jim works to find a participant in this crazy game… he is ageless as are all official players in Cryptofauna. This certainly adds to Canning’s metaphor of the Game of Life and the journey to purpose for Jim. And there are a series of evil doers who pose challenges along the way.

I liked the shift in reality vs fantasy in this one. To create a slice of our world that suddenly gets kaleidoscoped into a fantasy image of the game is a talent for this writer.

There were a couple things that I caused me to stumble a bit in my reading though. I wanted the plot to move forward a bit. There is a bit of description and then a bit more… this was super in places and then in others it was a bit tedious.

Overall, a good vision and a cast of kooky characters makes this a fun read.