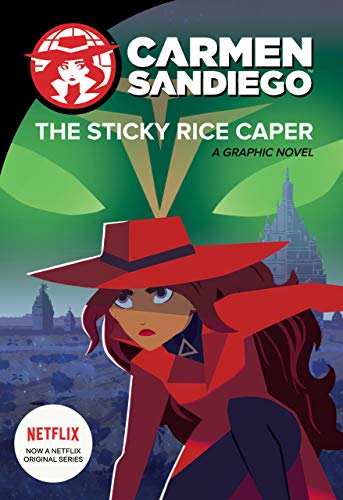 I’ve followed this franchise through my childhood to my adulthood… from the classic video game developed by Broderbund to the game show and now the animated show on Netflix… I remember this was one of the games (another was OREGON TRAIL!!!) that was available in my school’s computer lab. We would fight over who would be able to use the discs first. The nostalgia brought on by the game show, and that awesome song by Rockapella!

I have tried out the animated show with my daughter and she really likes it. Carmen’s origin story is pretty cool. She was “found as a baby in Argentina and raised as an orphan on Vile Island.” She is trained to become an operative for the vile organization… But she finds out that V.I.L.E stands for Villians’ International League of Evil. She leaves the island and Carmen makes it her life’s mission to stop Vile’s agents all over the world. She has three friends who help her through danger: Player, a young boy who can infiltrate any computer. Ivy and Zach, a brother and sister team who Carmen found when she was breaking into a Vile-operated donut shop in their hometown of Boston.

Unfortunately, this book is just a mirror (and a cracked one at that) of the episode of the same name. Carmen’s sidekick, Player, finds her a new mission in Indonesia where Vile is trying to poison the rice crop. She runs into a fun villain who will make things difficult for the crew to stop Vile.

The things we love about the franchise cannot be found in this book, or at least they can only be found very rarely and at the bare minimum. The side notes, the great tidbits, the facts about the places of the world. Two pages in the back of the book… I love books where the author has placed diagrams and boxes on the side of the pages filled with info. This would be a great opportunity for that type of design, but what we get is many pages absent of any dialogue so that the editors can stretch this one out to the required number of pages. It fails the franchise!!! The thing I hold so dear. I understand that the animated show is unable to do that as much, but Player and Carmen continually check in and he adds info she will need in her mission. Much of it is focused on specific intelligence, but he also gives general info about the countries and their peoples.

TLDR: Watch the show. Don’t read the graphic novels. And do please enjoy the nostalgia of the theme song above.