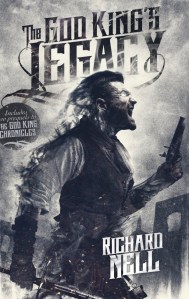 Jason over at Off the TBR created Self-Published Fantasy Month. Its purpose is to feature more authors and their works during the month of September. Read about more about it here. The God King’s Legacy is the first of at least three self-published books I have read this month. Here’s my review:

This is a doubleheader of novellas that I picked up in the SPFBO sale a couple weeks ago. They take place in a flintlock fantasy world that Nell promises to return to after the final book in his Ash and Sand series (I have the 1st book and have heard great things).  I read about this in his blog post here.

Now on to the stories. There are similar elements, but vastly different characters.

Rebellion of the Black Militia:

Young Johann Planck is a royal scribe who is schooled in the knowledge of all the dark arts, yet his cloistered life has kept his head in theory, far away from practice. Suddenly he is issued an order to track down a Level 5 demon with the help of a knight. The plan is that Lamorack will kill the creature and Johann will trap it in a tattoo he will etch onto himself.

The draw of this book for me was the Odd Couple relationship between the academic and the soldier. Johann’s expectations are shattered as he quickly realizes that Lamorack is no holy knight. His drinking and dirty mouth and trips to the brothel are a reality that Johann is not at all ready for, but there is a friendship that starts and both steadily realize that the other is needed.

I really like this story… Nell took care to fill in much of the worldbuilding as the two move about on their journey and as they prep for their ultimate fight. There’s a good deal of witty dialogue and beyond Johann and Lamorak, there’s some minor characters that fill out this piece.

A quick read to be enjoyed over a drink after a long day.

Kurt Van Clause (pseudonym to beef up his image) is a veteran in the King’s army… only a private, but he has been though two decades of fighting and is trusted by his fellow men. The campaign has stalled and is struggling for supplies, bodies, and most importantly, a direction… Kurt knows that proper orders will kick his crew’s butt in gear. He delivers a rescue mission, an order to infiltrate the enemy’s camp. The men round up all the ammo and armor they can find and are off. Will Kurt be able to keep them together? Is there a light at the end of the tunnel, a life after soldering?

Kurt and his crew are gritty and learning a bit more about Nell’s world makes for good read. It’s a dark and definitely more “grim” than the first story. I’d say there’s just as many laughs, but dark humor pervades. Another difference between the two is that Rebellion was a much more straight forward read with a couple reveals, but the twists in Devil are nasty and really reveal what Kurt and his veterans are capable of.

These novellas move Kings of Paradise up my TBR and get me excited for more of The God King’s Chronicles.

8 thoughts on “The God King’s Legacy by Richard Nell”