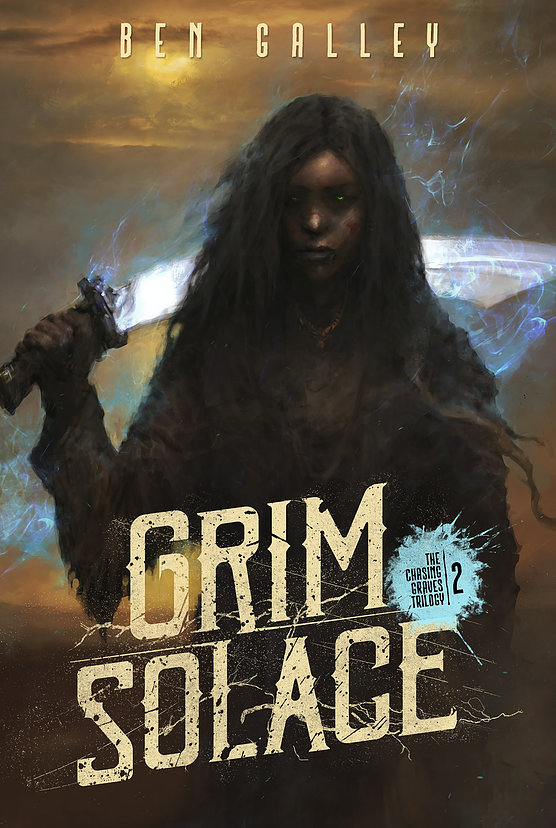 Ok… I know it says Chasing Graves on the banner, but I talked to Dave at TheWriteReads and he’s graciously allowed me to review Grim Solace for the blog tour because I already read, and loved, Chasing Graves.

Now on to Grim Solace (Some minor spoilers if you haven’t read Chasing Graves):

Caltro continues his search for a way to dissolve his bond, yet he is tied up in the political upheaval in Araxes. At the end of book one, he has been kidnapped because of his expert lock-picking skills. The Widow is not happy about his and uses all her dark etiquette to get him back and make his kidnapper pay.

A couple new characters enter the scene, but my favorites are allowed to be fleshed out a bit more. Nilith dashes across the sands to return for vengeance. She drags her shade, the undead king… they squabble bitterly for much of the trip. This is a fun relationship to be a fly on the wall to witness. Temsa and Sisine and the deadly cult are in the city fighting over the economics of the indentured soul business, a stab at the Tals and Tors that will have them scared and restless.

My favorite new character: A bonded sword named Pointy… a wealth of information about the Empire (maybe a bit too much). He’s longwinded and bores Caltro to death (ha!), but it’s tough to be picky when you’re kidnapped and locked in a sarcophagus.

Nilith’s minor thread evens out with Caltro’s and they gallop side-by-side… Two outsiders who will play large roles in the upheaval of the capitol. I found all the things I like about sequels in Grim Solace: The establishment of the soul trade has evolved in an intricate play for power, and these two great characters have a chance to spend some quality time on the page by themselves to figure out their ultimate goals.

I know my fellow bloggers have been raving about Chasing Graves… I’m here to tell you that the story only gets better.

Ben Galley is an award-winning fantasy author living in Victoria, Canada. Ben has been writing since he was shown a paper and pencil, and by his early teens he had written three books. He has been writing and self-publishing fantasy novels since 2010.