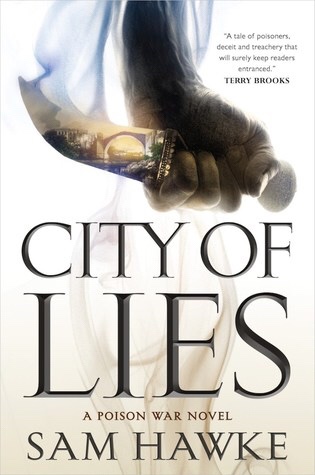 Roman Emperor Claudius was poisoned by his slave Halotus. The very one whose job it was to taste and deem his food safe. The secret service has been used by many presidents to sample and keep them from harm’s way. And some say the current administration goes to McDonald’s to avoid poisoning (some irony there).

Sam Hawke elevates this task to one of esteem and devotion in her outstanding fantasy City of Lies. The novel opens with three quick crises: both the food taster and chancellor die of an unknown toxin, an army has arrived at the walls of the city ready to strike, and the messenger birds have all been killed. Leaderless with a threat of siege, and no way to call for help. This set-up is one of the best I’ve ever encountered!

Enter the nephew of the proofer (food taster), his sister, and the heir to the chancellorship. All young and inexperienced, but loyal and without political bias other than to take care of the people of Silasta. A duplicitous ruling council filled with guild masters and wealthy family leaders, and a mob of angry, marginalized peasants create a political juggling act that doesn’t let up.

The story is told in alternating chapters from the points of view of sibling protectors. Jovan is the new proofer; he’s meticulous in his preparation, but this leads to anxiety and compulsions that he’ll deal with throughout the story. Kalina was the first proofer apprentice, but a weak constitution made it impossible to continue. She now uses her strengths of secrecy and levelheaded reasoning to help the cause. Together they are bound by familial duty to protect Tain, the new ruler, from forces inside and outside the city walls. Their first task is to answer two burning questions: Who is attacking the city and why? And what and who assassinated the old chancellor and his proofer?

Hawke excels at all combat writing: city sieges, dark catacomb stealth, hand-to-hand, and council chamber politicking. She mixes the perfect amount of world, city, and interpersonal drama and conflict to keep the reader flipping through the pages. Hawke’s decision to tell the story through the siblings’ eyes lets the reader see their different strategies at work. They battle their strengths and weaknesses as the city is surrounded and Tain is unsure of whom to trust.

Honor-down! City of Lies is a book filled with intrigue and violent passion, young idealism and old-world fanaticism, but most of all a loyalty among friends that will keep readers eagerly coming back for more of this series.

Thank you to NetGalley, Macmillan/Tor-Forge, and Sam Hawke for an advanced copy for review.

8 thoughts on “City of Lies by Sam Hawke”