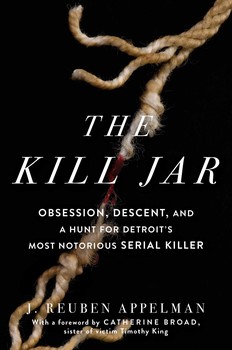 What is the nature of our own obsessions? How might helping others be the impetus to possibly finding our own peace?  These questions swirled around my head as I read about J. Reuben Appelman’s personal investigations into the Oakland County Child Killer case in his book The Kill Jar. The OCCK case is a series of at least four abductions and subsequent murders of children between 1976 and 1977 in and around the city of Detroit, Michigan. The serial killer has never been identified. Law enforcement agencies, families of the victims, and other interested parties have spent the past forty years trying to find the truth. And for Appelman, his search serves as a way to explore and possibly come to terms with his own unwieldy personal obstacles.

Even though many readers will be familiar with the crimes, I will purposely be vague in my review to ensure the reader has an unsullied view. I will say that there are tragic victims, a slew of suspects, possible cover ups, and links to great wealth and privilege. This is a dark tale full of the most horrible perversions, but there is hope and a movement towards catharsis. Appelman explains his connection, and his method of telling the story, and it will be up to the reader to decide where past and current bias may lay in the thousands and thousands of pages of evidence, the interviews the author conducts, and his own interpretations of the various accounts.

Appelman’s own terse visions of violence are on full display in his writing. It can be shocking, but told with a degree of transparency and honesty that is chilling, yet necessary. The structure of the chapters can be choppy, and the timeline is hard to follow at times. From victim to personal to past to present, it seems to be told in the cyclical obsessive turns of the author. But these minor issues only serve to indicate how chaotic and unorganized the original investigation was and how Appelman’s life is during the course of his inquiry.

I think many will align this book with the recent popular true crime shows Serial, S Town, and Making of a Murderer. I don’t think they are wrong, but Appelman takes a much more personal and raw path in telling his story. His motivations, whether altruistic or demon-driven, are always on display as his own professed imbalance is juxtaposed with the corruption of the case. The Kill Jar is an addicting read, one that will have you Googling the case late at night to look into the eyes of the suspects and to test your own theories.

Thank you to NetGalley, Gallery Books, Simon and Schuster, and J. Reuben Appelman for the advance copy for review.

3 thoughts on “The Kill Jar – Obsession, Descent, and A Hunt for Detroit’s Most Notorious Serial Killer. By J. Reuben Appelman”