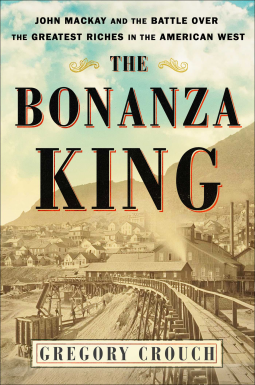 ‘… many of the richest men had been busted several times, and all of them knew they might well be broke again tomorrow.’

I spent many summer days in my youth playing ‘miner’ in the tailings of the Empire Mine in the Mineral King Valley. In current-day Sequoia National Park, the valley was the site of an electric silver rush in the 1870s, and over 100 years later I hid from my friends in the still-standing dynamite shack and looked for pieces of ore cart by the rock shelf where the stamp mill once stood. We heard stories about the mining days around the campfire from rangers and old timers. This is what brought me to want to read The Bonanza King by Gregory Crouch. His tales of the history of the Comstock Lode take place primarily on the east side of the sierras, but that era of American history, that time and that place in the American West has always held a great interest for me.

Crouch’s book is the best of historical profile. He intertwines the storied life of John Mackay with an intricate background that amply fleshes out his subject. This background includes: Irish immigration, roughin’ it Mark Twain, the transcontinental railroad, The Pony Express, the development of the telegraph, the building and commerce of San Francisco, and the funding of The Civil War. These topics are covered with care, interest, and a direct relevance to his main subject, Mackay.

Born into grave poverty in Ireland during the potato famine, he immigrated to New York and found his way to the shipyard. He took to carpentry work that would later help him in the mines when he travelled to the West Coast in the early 1850s chasing the fever. He eventually struck out to Virginia City and through hard work and a series of ingenious deals, he became a majority owner in some of the richest ore deposits on the mountain. He used this wealth to invest and develop many other business ventures, but it is in the shovels and sluice boxes that he develops his grit and his connections.

Mackay is only one of the great characters Crouch covers in his book. And his descriptions of the life of the miner and the economics of the times are truly entertaining. The men battle it all: weather, legal wrangling, monopolies, insider trading, disease, and endless speculation. Bad deals and dumb luck. The Bonanza King excels for me in the explanations of the vast engineering feats that were accomplished in those decades, in both the building of the mines and the extraction of the metals. These were both things that my imagination ran about when playing up on the Empire Mountain in my youth. I always wondered what the inside of that mountain looked like and I knew they didn’t just pull bricks of silver out of the rock. But how did they do it? Crouch’s writing enables a layman like myself to fully comprehend all the happenings hundreds of feet underground.

The Bonanza King is history told by that cool teacher you had in school, the one you remember making you actually want to go to class. (Shout out to Mike O’Toole and Carl Guarneri). If you have any desire to learn about life in the old west, you need to read this book.

Thank you to NetGalley, Scribner Books, and Gregory Crouch for the advanced copy for review.