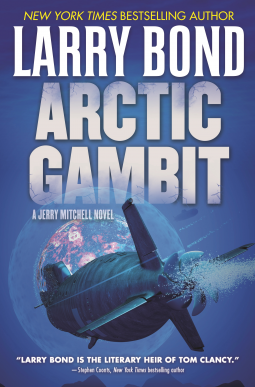 Larry Bond’s Arctic Gambit is a shifting-chessboard of a military thriller. With a lost American submarine, unrest in the Baltics, and suspicions of advanced Russian missile technology, Bond moves the plot forward in each chapter with quick shifts in the point of view from all sides of the conflict.

Set in the near future, the the story starts with the sinking of an American sub in the arctic just miles from the construction of a new Russian base. Intelligence gleaned from the ship shows evidence of a new type of missile, one that will advance the Russian first-strike capabilities well beyond those of the US. The administrations of both nations are forced to scramble their PR machines, formulate a clear response, and try to retain some semblance of an upperhand in the international community. As the development of the technology improves, the tensions rise to a near nuclear level.

This is a perfect book for naval-thriller junkies. Those who are interested in launch range, payload weight, advanced warning systems, and sonobuoy operations. While I’ve read many spy and criminal thrillers, this was my first foray into the genre of military thrillers. And this one relies heavily on the details and minutiae of protocol and technology. I liked it up to a point, but found that this one lacked the character development to draw me in. The author didn’t focus on any one character enough to create that bond between the reader and the page, which gave off the effect of watching the chess match from far above the action.

Overall, Arctic Gambit is a thriller that has a creative yet realistic premise which follows through with a taut ending.  Good depictions of underwater high-tension situations make this one a solid pick for those who like the genre.

Thank you to NetGalley, Macmillan-Tor, and Forge Books, and Larry Bonds for the advanced copy for review.