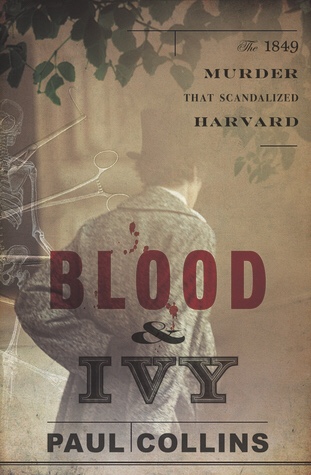 Paul Collins’s latest true crime account Blood & Ivy takes the reader into the world of Boston’s elite in 1849. The victim in this case is George Parkman, successful businessman, doctor, and most importantly, Harvard alumni. He disappears on the 23rd of November on a seemingly routine round of errands in Cambridge, close to the renowned college. Rumors abound and society’s mores are tested as the police and Parkman’s peers look for their friend. Victim begets suspect which begets one of the most famous trials in Boston’s history.

Collins’s exposition chronicles several interesting parts of 19th-century life: the history of Harvard Medical School, the reporting of court cases, the treatment of mental illness, the origins of the modern definition of reasonable doubt, and maybe most fun, the collecting of cadavers for dissection.

Collins’s engaging style is noted by its exhaustive research and enacting language. He puts the reader on the streets of Boston in 1849, a student in the lecture halls, a landowner collecting rents, a reporter in the courtroom. As with his other books, his setup and delivery are near perfect.

Blood & Ivy is another smart true crime book from Paul Collins. A slew of new types of evidence for the time and this great subject matter (a case that inspired Dickens!) will engage his existing fans and should bring a legion of new readers.

Many thanks to NetGalley, W. W. Norton & Company, and Mr. Collins for the advanced copy for review.