113… Is that a lucky number??? Because that’s the number of chapters in Milazzo’s quickly plotted superhero thrill-ride, The Faith Machine. Short and action-packed, they hit you hard and fast… and give the book a hair-trigger tone. Just read a couple lines from the last paragraphs of some of the early chapters:

Oh, it gets dangerous and fun early! 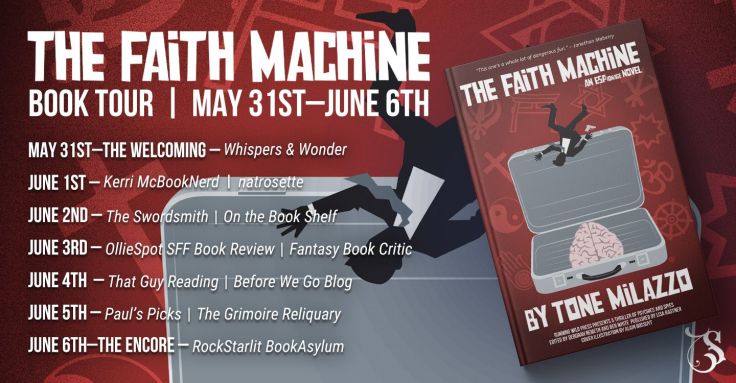 The book starts with the formation of a crew… at first I was thinking, ok, here come the misfits. But these characters definitely kick it up a notch: 6 agents ‘cursed with subtle, specialized, and sometimes sloppy psychic powers (called Cards)’ are pulled into a mission to retrieve a valuable device. The Soviets built The Faith Machine to twist people’s prayers into a powerful and dangerous resource. Yet, that first mission fails, and the humiliated crew travels back to the US to encounter a new villainy that promises to destroy their own faith in each other.

Pick up The Faith Machine to gain entrance into Milazzo’s ESPionage world… a place where assumptions are smashed by the psychic waves of a misfit crew.

Thank you to Storytellers on Tour and the author for allowing me to participate in this book tour.

2 thoughts on “The Faith Machine by Tone Milazzo – #StorytellersOnTour #TheFaithMachine”