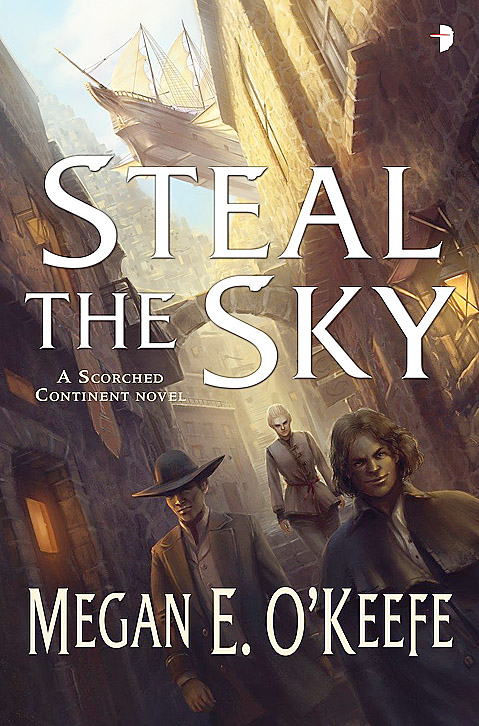 An oasis city in the middle of the desert… a desert so hot, the powers that be send the condemned out into the sand to die. Aransa is a city divided by class and selium-sensitivity. Mined in the dark pits under the city, some people are able to simply detect the lighter-than-air substance, while others manipulate it to change their entire appearance. The wealthy control the mines and the shipping industry, and the sel-sensitives are shunned and used for their abilities.

Enter the high-born ne’er-do-well Deton and his sidekick Tibs. Their airship is damaged on the last mission, so they must cozy up to the Watch Captain, Ripka, to get out of trouble. They hatch a plan of mutual benefit that will hopefully take down one of the elites. The wrench in the gears is a doppel, a shapechanger, who begins a series vengeful murders. Can they solve the crimes and knock the establishment for a loop at the same time?

The worldbuilding has a steampunk/ Western/ Victorian flavor with magic-infused characters and contraptions. Deton jabs at all comers with fists and a quick lip. And Ripka is a determined and logical detective. Each character has some secrets that O’Keefe slowly reveals, making for a great deal of satisfying mystery. The plot hums along nicely, and in the end, the reader is definitely ready for the next installment of The Scorched Continent.