Guild of Dungeoneering is a dungeon-building, turn-based card-fighting game… I think. I’m not sure about the exact gaming terminology. All I know is that I send my little dungeon dudes into the monster lairs, they take on the spider people thingies, and sometimes I come away with treasure.

Step 1: Build Your Guild. You are given a tutorial and helped along with building a barracks to house your dungeoneers. As the game progresses you are able to “Expand Guild.” Add rooms to your guild and weapons your dungeoneers’ card packs. The part of the guild that I frequent the most is the square directly below the shield: the cemetery. I’ll talk about it more later, but it took me quite awhile (like dozens of my little big-head guys) to get the hang of the game.

Step 2: Enter the Dungeon. “Go Exploring” You only have the choice of one dungeon to explore at the beginning of the game, but as you gain more experience, more become available. There are three levels per dungeon. When you enter a dungeon you are given several cards that will help you build your path. Your choices include adding new rooms/ passages, monsters, or treasure. You are able to play a maximum of three of these cards per turn. At the end of your turn, your character will move one space towards the goal of that dungeon, usually a big bad-guy boss, but this changes as you advance levels. 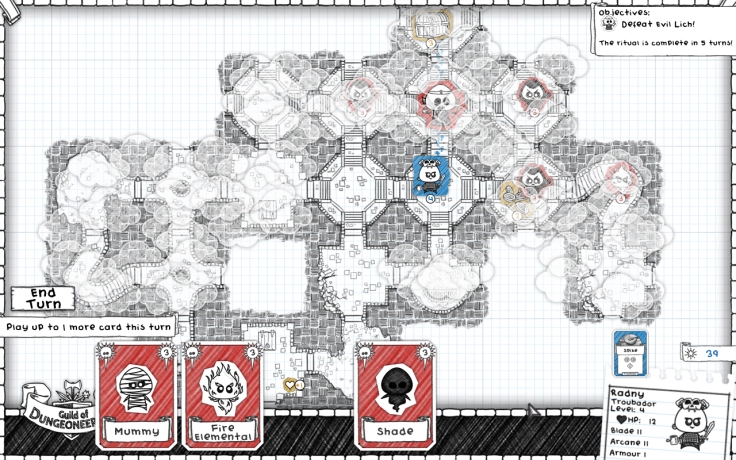 Step 3: Battle. When your character lands on the same dungeon square as a monster the fight will begin. One thing to point out is that each dungeon is populated with monsters who will either use magic or brawn, or a combo of both to do their fighting. Different dungeoneers also specialize in each type of fighting, so it’s important to use some strategy when choosing which dungeoneer to use in each dungeon.

You will be given a deck of fighting cards and be dealt three cards per turn. The monster’s card will be shown, so you can engage with a card accordingly with a defense, offense, or a combo card. See Below. Turns will continue until either you or the monster has perished. You will continue through the dungeon in this manner until the goal of that level is met.

Overall: Guild of Dungeoneers is a solid fantasy card game. The elements of the guild, the dungeon building, and the buying of weapons and special artifacts/ token for the dungeoneers create good depth. It took me awhile to get the hang of the card-fighting. Like I said before, I added dozens to the cemetery over the first several days playing the game. I finally was able to complete a significant dungeon, collect some loot, and level-up my little dudes. After getting over this hump, gameplay was easier, but still challenging. I recommend Guild of Dungeoneering to the D&D fan who needs a quick fix in the subway or the bathroom.