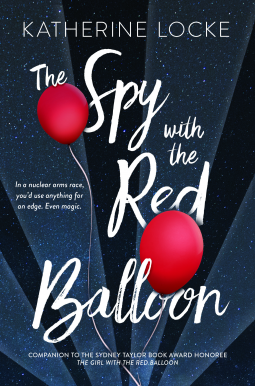 Katherine Locke’s The Spy with the Red Balloon blends magic, history, and romance in a story centered around the nuclear arms race of WW2. Siblings and magic-users Ilse and Wolf Klein are blackmailed into helping the war effort. Ilse is asked to use her knowledge of physics and magic in the development of a weapon for the US, and Wolf is sent to Europe to sabotage the Nazi’s own efforts. Ilse is loud and brash; she is keen to ask all questions, to experiment until all her genius is satisfied. Wolf is more subdued and his actions calculated; he is organized, yet still full of self-doubt. This pair of well-drawn characters who share the narrative responsibilities are physically apart, yet connected by time and a desire to end the awful war.

Locke’s character building is impressive. The reader feels the weight of the world on these characters, the full embodiment of the engagements of science, magic, and subterfuge. The author shows great strength in building relationships, and the crafting of new and rekindled love. Yet, at times the narrative is told with a sweeping broad brush. It may be because it is a YA novel or that I’ve been jaded by the dozens of WW2 spy novels I’ve read over the years, but there were flaws with the lack of details of wartime events. And the beginning of the narrative seemed rushed; there was limited exposition as the characters are quickly thrown into the predicament without much background.

Overall, I recommend The Spy with the Red Balloon, a YA novel with admirable depictions of strong relationships and difficult ethical dilemmas. Locke’s writing is full of memorable lines and some excellent action scenes. Also commendable, I greatly appreciated the author’s note at the end of the book paying homage to the many people who served the cause during the country’s efforts during WW2.

Thank you to NetGalley, Albert Whitman & Company, and Katherine Locke for the advanced copy for review.