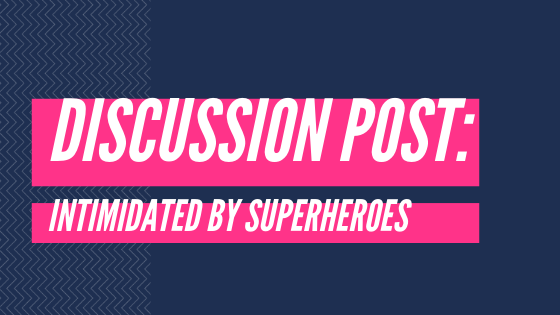 I haven’t reviewed many superhero comics on the blog because I am concerned about getting it wrong: the backgrounds, the storylines, everything. Hesitant and intimidated and lost. Where do I start? Is there a website I can look at? DC or Marvel? Where is the big arrow that says: START HERE!

Star Wars is my go-to world to explore, and it’s the place I’ve spent the most time in. I’ve seen the films, read many books, watched the TV shows, played a couple video games, and perused several of the comics. I feel like I could pick up any book/ comic and jump right in.

A distant second is the world of Batman. The Animated Series from the early 90s was a huge part of my childhood. And from that I read a couple novelizations and I just read a couple more in the last 6 months. I was really into the Xbox360 games starting in about 2008. I feel comfortable in Gotham and with many of the villains, but there’s still part of the mythos that I am not familiar with, mostly the characters that show up only in the comics. I was talking to a friend of mine a little while ago, and he was telling me about a series he had been reading. He said, “Yeah, so Nightwing comes back and makes the decision to fight with this other guy…” I kinda nodded and smiled, and then feeling dumb, asked, “Who’s Nightwing again?” My friend was very nice and patient and explained the whole origin story.

To be honest, I have shied away from the Marvel movies because I feel like I won’t get ‘it.’ Y’know, Who that guy is and where she came from and why those guys are always so angry!?

With me and comic books, it comes down to the fact that with many of them there have been so many different authors and story arcs that it can be hard to figure out a good place to jump in. I think it can be hard to jump into any new genre or large series. Warhammer has piqued my interest at times, but from the outside looking in, I just don’t know if I have the time to explore it.

I am far from a completionist… but I never really believe people when they tell me that I don’t have to read the first 8 books of a series to understand this book. Ha!

I did get some good advice from my buddy, Lashaan over at Bookidote: “One of the biggest fears of every reader who wants to jump into the superhero game. There’s no wrong place to start, you just have to be willing to take the dive and to then let the stories guide your adventure.” I thank him for these wise words. The next day I jumped into Shazam! I will be posting that review soon.

Major rambling in this post, but what are your thoughts on this subject?